Intelligence Advanced Research Projects Activity (IARPA), an agency of the US military akin to Darpa, is funding a $4.8 million project spearheaded by Boston University College of Engineering, the Harvard John A. Paulson School of Engineering and Applied Sciences, and Lightmatter, a startup developing “photonic supercomputing” chips.

Electro-photonic computing, or optical computing, is thought to hold the promise of solving one of the biggest technical hurdles that self-driving cars face today – delivering high performance, low latency computing power that is also energy efficient.

At the end of the IARPA-funded experiment, the scientists hope to have “a fully functioning prototype of a self-driving car that runs on light”.

The project’s stated charter is to develop an Electro-Photonic Computing (EPiC) solution for autonomous vehicles, but the technology could prove useful in many other industries.

The global autonomous vehicles market is projected to grow to a $11 billion industry by 2028, according to Fortune Business Insights. 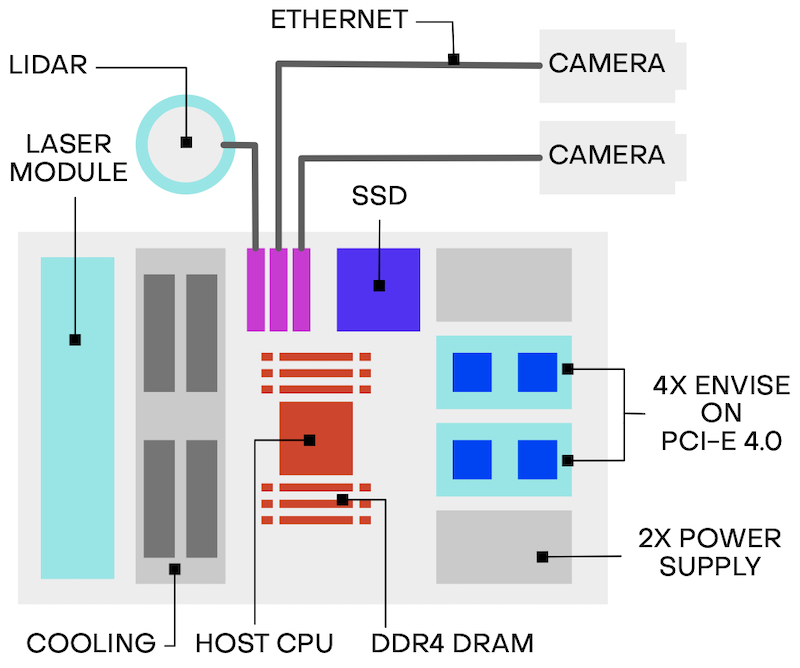 However, a significant barrier to accomplishing that growth is the availability of on-board compute system that does not negatively impact vehicle range and battery life. Advancements in EPiC solutions are crucial for overcoming this challenge.

“We’re thrilled to be teaming up with Harvard, Boston University, and IARPA to fix that issue with Lightmatter’s Electro-Photonic Computing solutions.”

To operate safely, autonomous vehicles utilize a myriad of sensors that generate data, requiring trillions of calculations per second.

Sensors may include radar, lidar, cameras, and other driver assistance devices. Low-power consumption is a crucial challenge that the autonomous vehicles market faces to deliver competitive vehicle range and performance.

Increasing the number – or the resolution – of sensors is needed to deliver Level 4 and higher autonomous capability. However, deploying more sensor units in autonomous vehicles is not an option, as it would increase power usage of current transistor-based computers, which already consume a significant fraction of the power available to the vehicle.

In the past, compute performance improvements guaranteed by technology scaling, enabled incremental improvements of the computational capacity of transistor-based computers.

However, a slowing of the rate of improvement based on technology scaling is creating a widening gap between compute performance and system need.

This means that deploying advanced algorithms, such as deep learning in autonomous vehicles, requires a new paradigm in computer design that exploits not only innovative architectures but also radically novel physics.

The team’s hybrid electro-photonic approach has been motivated by the development of photonic chips that compute using photons, not electrons, at speeds on the order of tera operations per second, while consuming much less energy.

A critical competitive feature of the team’s approach is the ability to fabricate photonic chip based compute systems using standard semiconductor fabrication and OSAT processes within existing manufacturing facilities.

In the proposed EPiC system, photonics is used to perform large matrix computations, while electronics is used for performing non-linear operations and storage.

In autonomous vehicles the EPiC system is fully integrated with the sensors, and together perform perception, mapping, and planning while overcoming the power and performance limitations of electronics-only computers.

The project is funded under IARPA’s Microelectronics in Support of Artificial Intelligence (MicroE4AI) program. IARPA is a government agency which funds what is described as “high risk, high reward” research.