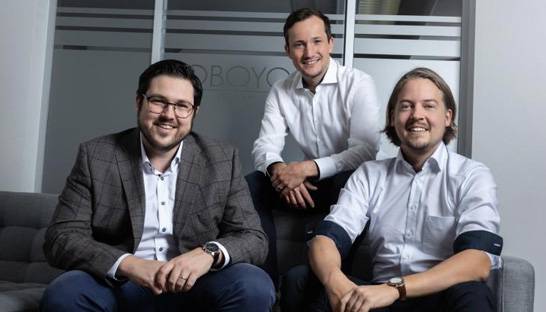 Since launching in 2015, Roboyo has quickly built a market share in the global RPA landscape. The three co-founders – former business consultants Nicolas Hess, Christian Voigt, and Sven Manutiu – started the company after discovering that RPA sales around the world were doubling every year.

Roboyo positions itself as a specialized implementation partner, starting with the consulting phase, in which strategic automation possibilities are identified, through to the development and implementation phase of RPA solutions. Half a decade after launch, the founders seem to be sitting pretty in a booming RPA market.

Global RPA software developers like UiPath, Blue Prism, and ABBYY all fall on Roboyo’s partnership list. The company supports RPA users across Europe and the world in developing and deploying these solutions. Customers include the financial services, automotive, manufacturing, healthcare and retail sectors, among others.

Nicolas Hess pointed out that most organizations these days have a use case for RPA. “Many companies are fully automated in their factories, but many processes in the back office are still running as they were 30 years ago,” he told Handelsblatt. Roboyo supports the modernization and currently works with a team of 120 professionals in six regions, including the headquarters in Nuremberg and other offices in Europe and the USA.

“We are a global company and want to become number one in our segment in the future,” said Hess. A sizable amount of € 21 million raised in Serie A by MML Capital Partners of London is sure to help Roboyo achieve this goal. Funding was facilitated by corporate finance firm Alantra, which works closely with MML and other funding partners.

According to Alantra Director Simon Roberts, RPA is a market to watch out for because of its wide range of applications. “RPA is one of the fastest growing software subsectors and is expected to receive significant attention in the coming years as companies seek to increase their RPA adoption and develop their digital transformation strategies,” he said.

While Covid-19 has done a lot to squeeze the funds in circulation, the demand for RPA services certainly hasn’t hurt as companies have realized how far they need to go on their digitization journey. “We had the best months in our history,” said Hess, describing the Covid 19 crisis and all that followed.

According to Christian Voigt, investors are aware of this trend that has put Roboyo in a good position in finding funding. “We had a choice of investment partners and chose MML because of their unique partnership approach and our shared vision of future opportunities for the intelligent automation market,” he said.

Sven Manutiu, meanwhile, stated that the money will be used to fund the expansion of the scale and geographic reach. “With this investment, we can support more customers in more areas as partners in their transformation into the digital age. With MML, we have found the right partner to further accelerate our business and attract the best talent in the market, ”he said.