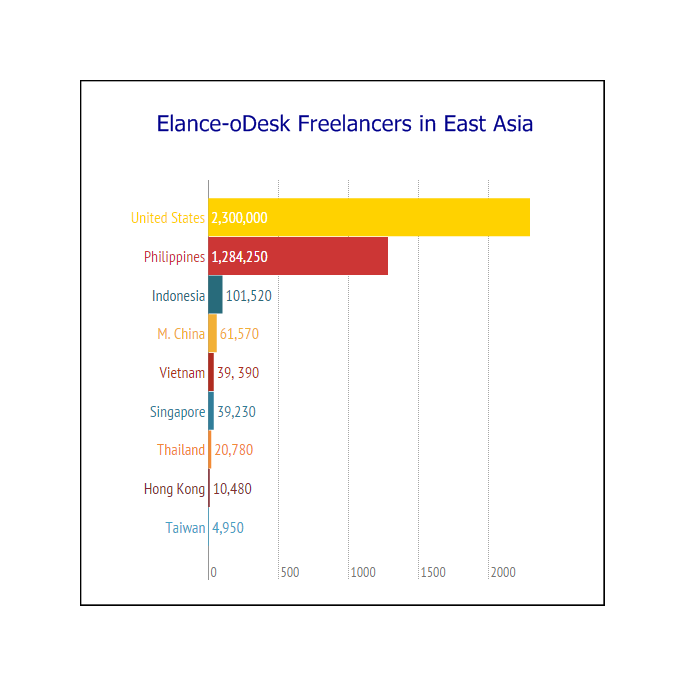 In the gritty underworld of freelance writers, editors, and translators, oDesk and Elance have a shitty reputation. On these two middleman marketplaces, employers post temporary jobs, sometimes with a payment margin but often without a tariff. Job-seeking writers, editors, or translators (or developers, designers, or customer service representatives) then propose their own fee. The sites make money by taking 10% (oDesk) or [updated:]8.75% (Elance) of the contractually agreed fee.

The situation is similar to an auction: the lowest bidder often wins. You often hear “race to the bottom” when the names of these two giant California websites pop up. US online writer forums always warn newbies about them. So do the established writers who blog or run expensive courses and who promise aspiring writers that they can still somehow make a living writing writers even if legitimate publication rates continue to plummet. “Race to the bottom” is followed by comments such as: “You are competing against Indians. Who can bring you 1000 words for a dollar!”

It is therefore not surprising to find that, along with the 2.3 million Americans, 1.9 million Indians make up the largest number of freelancers registered on the two websites in 2014. The websites have continued to have different online presences, despite being called Elance oDesk in March of last year. Filipinos, or more precisely freelancers who live in the Philippines, are the next largest group. There are 1.3 million of them. In East Asia, Indonesians are the second largest group with more than 100,000. Freelancers in mainland China are a far third at 62,000.

A total of 9.7 million freelancers are registered at the two locations, 4.9 million of them in Asia. The company says employers spent SGD 1.26 billion ($ 951 million) hiring at the two locations in 2014. So it’s no wonder that Elance-oDesk can claim to run the world’s largest freelance market, even if it still has a tiny share of the global freelance market and a freelancer at both locations averages less than $ 100 per year earned 2013.

The 2014 Freelancer Numbers in the box below require a range of qualifications. The same person could be registered on both sides and thus counted twice. Although I’ve never made any money on either side, I believe I’m registered on both. The number of registered freelancers likely far exceeds the number of active professionals, as George Anders pointed out in a Forbes post following the December 2013 merger announcement.

Additionally, freelancers registered in the Philippines, Indonesia, Singapore or wherever are not necessarily Filipinos, Indonesians, or Singaporeans. For example, consider all Vietkieu – Americans, Canadians and Australians – who are temporarily in their home country. Or the many expats in China who translate through online contacts. In fact, Elance-oDesk found in its 2014 annual report that Chinese-English translators “are in great demand, have increased by more than 50% in the second half of 2014 and have made it into the top 10 list of language translation requests”.

Next, some employers require native English speakers or Americans or locals from a small group of Anglophone countries. Still, it’s safe to say that global online marketplaces like Elance-oDesk are now allowing many seasoned Filipinos to stay at home instead of working overseas. I also like to think that the many Filipinos who teach English in Thailand and Cambodia who are lucky enough to get $ 600 a month could make a few hundred more by working online.

Writing, editing and translating drones might be surprised to learn that their areas of expertise do not encompass the largest segment of jobs – that is, not measured by income. Fabio Rosati, CEO of Elance-oDesk and former CEO of Elance, says: “In Asia we see most of the work in the categories based on freelance income: web and mobile development (47% of total freelance income), Design & Creative (16%) and Admin Support (13%). ” That’s to be expected, I suppose, because even a large one-off job from a writer, editor, translator, or transcriber isn’t going to generate the fee for a website design or mobile app.

For Filipinos, typing and translation represented only 7% of their total Elance oDesk income in 2014. This surprised me a little since so many Filipinos are fluent in US English and the Associated Press style (the standard style for many website copy) and know how to write a press release. The largest share (35%) of Filipino income came from the nebulous category of “administrative support”, followed by customer service (15%), sales and marketing (14%), web and mobile development (11%), and design and creative ( 9%) work.

Freelance design and IT staff for Elance, founded in 1999, and oDesk, founded in 2005, must hear the same dire warnings as writers, followed by advice on how to set up your own websites and hunt down employers right away. Even for seasoned, skilled people, this is easier said than done if they have never been a freelancer.

Rummaged around on both sides, I’d concluded in the past that they weren’t that bad. But I just visited the shiny new site from oDesk, which looks exactly like the shiny new site from Elance, and immediately saw this offer among new editorial assignments: “The expert and researcher had to write a short, well-researched scientific manuscript about a neurological disorder write. Budget: $ 5. ” Well, the prices are not that absurd. Among them was a $ 100 project for “a competent advisor to write a final research project on the subject of bilingual teaching in primary schools. College-level writing and knowledge of the APA format are a must. ” Well, they are not all a challenge to your personal ethics.

Over on Elance, in the Design and Multimedia category, the first job offer with an attached price tag (“less than $ 500”) is from a US graphic designer who wants to code a four-page website in HTML5 in Illustrator. Three proposals have been published so far, sums not known: two from India, one from Bangladesh. If the payment ends up being $ 499 – not bad at all; if $ 50, not that much.

People who live in developed countries are unlikely to make a decent living by only working for one of the two locations, but for people in dire need of quick buck, there are junkier, riskier online sources for temporary employment like Craigslist and the seediest Content Mills (e.g. Demand Studios, if still available). First of all, employers on Elance and oDesk don’t necessarily hire the lowest bidder; You will likely weigh experience and qualifications. After completing a project, employers evaluate the quality of the work, which allows a competent freelancer to make a name for himself. At least at oDesk, freelancers can further increase their credibility by taking simple on-site tests (e.g. English grammar and punctuation, Associated Press style) or by proving their certifications in various software applications.

I got the impression that oDesk is listing higher paying jobs than Elance, but as you can see from the comments on review sites and the posts by George and Rip Empson of TechCrunch after the merger news, the opinions of freelancers on the platforms of Elance and oDesksk and Prices are strong but not unanimous. Based on these comments, I think Elance was preferred, but I could be wrong. Employers seem similarly frustrated and divided.

Both authors also suggested improvements that would benefit employers, employees and the bottom line of the merged company. They suggested that there are easier ways for employers to find the most trusted employees on the sites, that there should be potential for freelance work to evolve into full-time positions, and that it would be wise to get larger companies listed in the market win. However, there has been little online feedback or reviews of the merger over the past year, despite Elance-oDesk raising an additional $ 30 million, bringing the total of the separate and merged companies to $ 170 million.

What the Elance-oDesk did last year is to expand the locations of its employers or at least to emphasize the international presence. Singapore is Asia’s top market for online hiring of freelance talent and a top 10 market in the world, according to a company brochure. Companies in Singapore spent 46% more hiring freelancers online compared to 2013. Technology is the largest category of online work in Singapore (accounting for 60% of total spending). “

But from which countries do these companies source their workforce from Singapore? Probably not North America, Europe or Australia. When I met Ye Myat Min from Myanmar startup NEX last summer, he was confident that his new company could attract web and mobile developer projects from Singapore by offering significantly lower prices. After attending school and working as a developer in Singapore himself, he said that many – perhaps most – of the developers and designers in Singapore are expats, particularly Burmese, Filipinos and Indians. Maybe some current Elance and oDesk freelancers will post an update in the comments section.