According to the report, while the flood of customer data in most organizations has created opportunities for companies to deliver better customer experiences through personalization and omnichannel engagement, it has overwhelmed employees with manual, data-related tasks.

The overwhelming conclusion is that workers are now ready to be automated – or rather, they are ready to be automated. And they are clear about where this should be done. When asked which task they would most like to automate, a third (33 percent) said they pull data from different systems, followed by filling out forms (28 percent) and checking data accuracy (26 percent).

Elsewhere in the study, 34 percent of managers leading people in customer-facing roles believe RPA will help their company deliver better customer experiences, while 31 percent in the UK believe RPA will increase overall sales or save the company money.

To meet customer demand for bespoke services, companies should provide their employees with RPA solutions that display contextual data on their desktop in a single screen view when they need it.

Given the headlines about artificial intelligence and its potential threat to employment, the results may come as a surprise. However, this is not really news in digital workplaces where software and other tools are already doing tasks.

The results of the NICE survey fit well with other research, this time by Garter of Stamford, Connecticut, showing that the RPA market is expanding completely. In fact, the problem of repetitive work practices is so pronounced that the RPA market grew 63% to $ 846 million in 2018, making it the fastest growing segment of the global enterprise software market in 2019.

Like many other areas of technology, the market is controlled by a handful of vendors and, surprisingly, not by those who already control large parts of the corporate market. 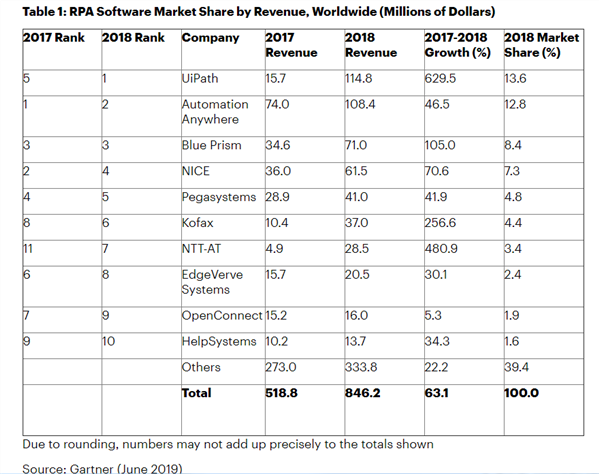 The five largest RPA providers controlled 47 percent of the market in 2018. Places six and seven of the provider achieved three-digit growth in sales. However, Gartner expects the RPA software market to be very different in three years’ time as companies like IBM, Microsoft, and SAP partner with or acquire RPA software providers.

While North America is still the dominant force in the industry with a share of 51 percent in 2018, its share has dropped two percentage points year-on-year, while Europe is number 2 with a share of 23%. Japan took third place with an acceptance growth of 124 percent.

Behind all of this lies digital transformation efforts, where banks, insurance companies, telecommunications companies and utilities are the biggest users. The ability to integrate legacy systems is the key factor for RPA projects.

Elsewhere, there is good news for Microsoft users, and especially for those using Skype for Business, Exchange, and SharePoint 2019. According to a tech blog by Microsoft MVP Tom Arbuthnot, Microsoft is extending the support period for all of these servers by three months through January 2024.

When it was released in 2018, Office 2019 included the Word, Excel, PowerPoint and Outlook apps as well as Skype for Business and the Skype, SharePoint and Exchange servers.

Three extra months are not much and will certainly not give any company that has not planned for the end of such support contracts. However, the lack of preparation is a recurring issue where many companies secure their deployments too shortly before the deadline for convenience, as was the case with the XP operating system, for example.

Chatbox works with Ytel. together

Elsewhere, Seattle-based Chatbox, which develops corporate messaging solutions, announced a new partnership with Ytel in Lake Forest, California. Chatbox is an integrated messaging ecosystem that companies use to create and automate personalized, results-driven conversations through SMS, chat, and social channels.

As an SMS platform that simplifies the operation and automation of bidirectional text messaging for marketing, sales and service on a large scale. Gartner recently named Chatbox a “Cool Vendor” for CRM customer service and support.

Sending SMS with customers may seem like a straightforward proposition, but getting it right on a large scale is a complicated challenge that Chatbox has been facing for over five years.

For its part, Ytel is a communications PaaS provider. The Chatbox platform now tightly integrates with Ytel’s conversational SMS capabilities and configurable workflows while leveraging the carrier agility that Ytel customers rely on.

Finally, this week SeeUnity, based in Johnstowsn, Colorado, a developer of content integration and migration solutions for on-premise and cloud-based enterprise content management applications, has completed the integration of its Echo Content Synchronization (Echo) product with cleanDocs Pittsburg announced. based DocsCorp.

Customers who use SeeUnitys Echo to securely publish content from their DMS to their collaboration system such as HighQ for external use can now minimize the risk of data breach by using cleanDocs to remove sensitive metadata from their documents and optionally transfer them to convert secure PDFs.

CleanDocs protects against accidental information leaks by removing metadata based on configurable company-wide policies. It is the only application of its kind that works with Echo to clean up Word, Excel, PowerPoint and PDF documents of metadata in seconds.

The integration of SeeUnity and DocsCorp offers users an additional layer of security for external collaboration, promotes workflow efficiency and supports document management. Organizations using Echo’s publishing capabilities can now select cleanDocs options in the Echo Admin Studio. Echo works with policy files configured in the cleanDocs utility to remove or retain certain document metadata when content is published to the collaboration system.