Continental claims all its production runs on ‘100 percent green electricity’

Continental, one of the world’s largest suppliers of vehicle tyres and automotive components and systems, claims that all of its production has been running on “100 percent green electricity’ for the past couple of years at least.

Continental claims to have been procuring all of the electricity for its production sites from renewable energy sources as of fiscal 2020. The company says this is the “clear conclusion” reached in a report by auditor KPMG.

All relevant renewable energy sources such as water, sun and wind are used.

Dr Ariane Reinhart, responsible for sustainability at Continental, says: “Sustainable business is the future. With our ambitious goals, we are decisively pursuing the transformation to a sustainable economy.

“We are delighted by this objective validation of our work. The result of the audit shows that we take our sustainability ambitions seriously and are meeting the targets we have set ourselves.”

Continental says it applies “strict standards” to achieve its ambitious sustainability goals. To ensure that green is not only green in theory but also in practice, the technology company relies on self-generated energy, specially designed green power purchase agreements and so-called energy attribute certificates (EACs).

These certify from which sources and from which locations the green electricity originates. Only in a few exceptional cases were energy attribute certificates obtained in 2020 from countries that were directly connected to the electricity grid of the country in which the electricity was consumed, for example because no accepted certificate system was available locally that met Continental’s strict criteria.

Continental bases the quality characteristics of its energy attribute certificates on the criteria of the RE100 initiative, which the company joined in June 2020. RE100 is a worldwide alliance of companies that have set themselves the goal of using only green electricity in the future.

The systematic transition to green electricity marks the first step of an ambitious innovation and technology marathon toward company-wide decarbonization as part of Continental’s new environmental strategy.

Its decarbonization targets were recently recognized as being compatible with the 1.5°C goal of the Paris climate agreement by the independent Science Based Targets initiative (SBTi).

By 2040, Continental aims to make the processes at all of its more than 500 locations carbon-neutral through massive investments in energy efficiency, zero-carbon technology and the use of green electricity.

By 2050 at the latest, the entire value chain should then be carbon-neutral.

Thomas Sewald, head of environmental and climate protection at Continental, says: “I am delighted with the commitment and motivation shown by all colleagues involved.

“Climate change is one of the most important challenges of the 21st century, and the preservation of natural resources is vital for both ourselves and for future generations. That is why I am proud that we as a company are doing our part.”

The transition to 100-percent green electricity marks the first of several key steps toward carbon neutrality. At the end of 2020, the company launched its Carbon Neutral for Emission-free Vehicles program, the vision of which is to make emission-free mobility completely carbon-neutral for the first time.

To date – as attested by the results of Continental’s Mobility Study 2020 presented at the end of last year – there is still a great deal of skepticism regarding the climate footprint of e-cars, especially in Europe.

With the Carbon Neutral for Emission-free Vehicles program, Continental will make its entire direct business for emission-free cars, buses, trains and other vehicles carbon-neutral worldwide from 2022.

The program covers the company’s production processes as well as their upstream stages and recycling at the end of use. In this way, the technology company is helping the industry make emission-free mobility completely carbon-neutral. 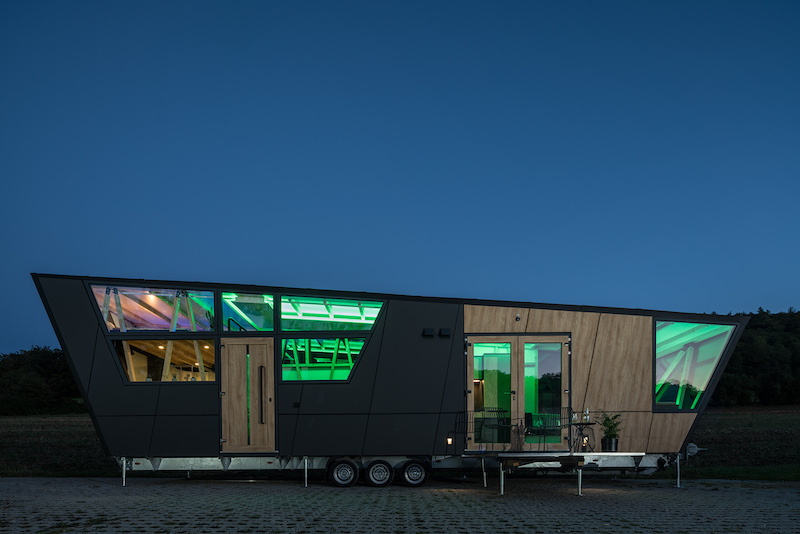 And perhaps to reinforce its green credentials, Continental has unveiled a tiny, prefabricated house on wheels made entirely from materials the company has in stock or has recycled.

Pictured above, it could be argued that it looks like a trendy caravan, but perhaps that would be unfair. Prefab tiny houses are much-discussed in today’s economic and social climate.

As Continental says, “Micro housing” and “minimalism” are two trends reflected in the ContiHome because tiny houses are an answer to rising rent costs, lack of living space, and resource scarcity.

According to a YouGov survey that Continental cites, approximately 23 percent of people would consider living in a tiny house like the one the company has designed. In normal times, this would seem like a high percentage, but the pandemic has changed a lot of people’s attitudes and financial circumstances.