An RPA Robot For Every Employee At Dentsu? 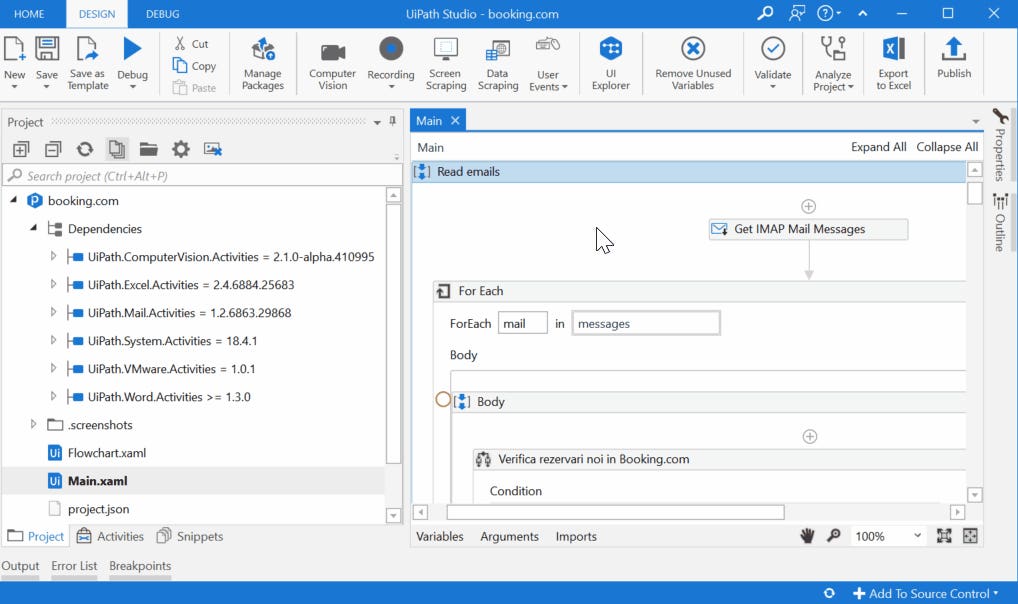 A StudioX screen from UiPath

If you’ve followed the robotic process automation industry, you may have heard the idea that at some point, every person in a company will have a software robot that will do all of their previously tedious tasks. This marketing concept, published primarily by UiPath, a leading RPA provider, is supposed to be – I believe – ambitious. The idea is that at some point there will be huge armies of citizen vending machines, each of which is busily improving its own productivity by creating bots to do the boring, repetitive tasks we all suffer from.

As far as I know, there are no large organizations that still have one robot per person. However, there are some who are moving in this direction. One of them is dentsu international, a global advertising agency and PR company based in Tokyo. It is the fifth largest advertising agency network in the world with over 60,000 employees in 145 countries. This term “network” is important because dentsu, like most of its competitors, is a holding company with many holdings. Most were obtained through acquisition and historically have been pretty much alone if they did well.

However, Max Cheprasov would like the various holdings and business processes of dentsu to have something more in common. He’s the company’s chief automation officer, a title few in the world hold, at least according to my LinkedIn searches. He has both an operational and a technological background and combines these skills to achieve operational improvements in dentsu’s processes. Around 2017, he began to get excited about RPA and automation, also because he believed that traditional approaches to process improvement were falling short. He is now working with several automation partners, including UiPath, to standardize, improve, and automate information-intensive processes and tasks using RPA.

Some of these processes are company-wide – tasks that are or could be performed similarly across the company, or at least across large areas of the business. With the idea of ​​concentrating on these, Cheprasov founded an Automation Center of Excellence (CoE) at dentsu in 2018. His mission was to find automation options at the company level and develop bot solutions for them. The Council of Europe staff were spread across Dentsu, conducting workshops and surveys to identify high-frequency, labor-intensive tasks that were highly structured and accessible to large RPA projects.

However, the CoE team found only a relatively small number of large-scale opportunities. They started working on those, each of which took several months to develop. However, in its company-wide search, the team became aware of a much larger number of potential projects – “a long series of microtasks” – carried out by individuals that the Council of Europe could never reach. As Cheprasov put it: We had to figure out how to bypass automation possibilities from top to bottom and from bottom to top. “

The Automation CoE then took on a second mission: recruiting and enabling a number of “citizen developers” of smaller automation solutions. The aim was to give employees tools to cut red tape and accelerate innovation at the local level. This initiative coincided with the announcement of StudioX by UiPath, an RPA product designed for citizen developers to create automated small processes.

In 2020, the Automation CoE began identifying citizen developers across service lines and training them to use StudioX. Fifty people were trained that year, mainly at dentsu’s US media buying agency Carat. Compared to some of dentsu’s other business areas, the media business has slightly more structured and repetitive tasks that are accessible to automation. Each citizen developer received twelve hours of self-directed training and then participated in a two-day hackathon with a StudioX engineer. During the hackathon, the developers developed 60 solutions that automated around 3500 working hours. Many community developers then took other teaching modules on their own. Each automation solution developed was added to the UiPath Automation Hub, which was available to all dentsu employees.

Jessica Berresse and Erica Shand were two of the Carat employees who went through the first round of citizen developer training. Kate Hall, an automation solutions architect who leads the Citizen Automation program within the Automation COE, had come to them and suggested that StudioX could help them improve the productivity of the specialized task teams (such as search, planning) and account teams they support to improve. Both felt that the teams they worked with “do mindless tasks in hours” and “really smart people who waste their time doing things a robot can do”. Now both state that they spend more than half of their time on automation projects. Neither of them had much experience with robotics or programming beyond Excel macros.

One of Shand’s first projects involved a search team. She asked the team to describe a simple and time-consuming task. You mentioned one where certain ad campaign runs were found in Google Ads and then downloaded, renamed, and saved. The task took five people a total of about 70 hours per month. After the team described the specific steps they took in completing the task, Shand was able to design the same actions in StudioX in a matter of hours. Now the solution takes a bot about 35 minutes to run one day per month.

Berresse, who has been with Carat for around seven years, originally had a strategic and planning role as a customer. She now works in Account Operations, focused on finding and building cross-functional efficiencies that save teams time. Prior to her role as an RPA Citizen Developer, she focused on measuring efficiency using advanced Excel formulas. When she saw what StudioX could do, she “jumped for joy”.

One of her favorite examples of tasks she’s automated was one of her own. When she started in the operations role, one of her assigned jobs was “Timesheet Cop”. The finance team had time reports but complained that too many people didn’t fill out their timesheets on time. They asked the operations team to look into the problem and Berresse reviewed the late timesheet reports and sent the same emails every month to habitual timesheet offenders found in the report. She was able to quickly create a StudioX bot to go through the report, find the culprits, and fill in the details of the email templates. She was very happy never to have to be a police officer again.

Both Berresse and Shand said they play roles in process improvement as well as automation. You’re not trying to automate bad processes. The goal is to optimize what people do and then automate that with a bot. Berresse commented: “Nobody wants to automate in order to automate. In some cases, we can see enough improvements that the team may not need a bot after all. “Shand agreed,” We almost always do some process improvements before we automate the process. A team may download things one at a time rather than in bulk, and it is our job to encourage them to do better. “

Dentsu, Max Cheprasov and the CoE Automation have ambitious plans for the further development of the citizens. Cheprasov said the CoE hopes to triple the number of citizen developers in the first quarter of 2021. They also plan to expand the program to Canada and international Dentsu companies outside of the media, including Creative and Customer Experience Management (CXM) units. The CoE has also carried out automation work in the IT and finance functions for dentsu and hopes to be able to expand this to other functions as well.

In addition to recording automation programs in the Automation Hub, the CoE will also collect ideas and documented requirements for them in 2021. Kate Hall said, “When a task is not done by you personally, figuring out the steps involved can be difficult. Once we get similar process documentation in the automation center, the citizen developers will have to spend less time asking people what they are doing. “She said the CoE also has quarterly meetings with the citizen development community where tips and tricks, new software features and newly released bots are posted in the automation center.

Cheprasov is focused on the bigger picture and how automation could transform the industry. “We plan to reward people who automate aspects of their work with incentives. Not everyone has to be a developer, but we want to reward those who make themselves and their groups more productive. No other company in our industry has done this almost as aggressively as we have, although some have tried to automate within certain business functions – and I know they are watching us. “He sees citizen-based automation as the fastest way for any company to get started with RPA.

RPA and UiPath are also at the heart of a collaboration dentsu developed with AutonomyWorks, a company that specializes in creating employment opportunities for its employees in the autism field. The Automation CoE trained AutonomyWorks employees and used them for their own projects. A Dentsu press release on the partnership notes stated, “Many people on the autism spectrum are characterized by tasks that require greater repetition skills, pattern recognition, and attention to detail. With the advent of robotic process automation (RPA) and the advancing maturity of AI services, a company can strike the perfect balance between humans and robots by using cutting edge technology to improve human work in the most effective and efficient way. “

Cheprasov often says that the mission for automation at Dentsu is “to increase human potential through automation”. This applies to both the AutonomyWorks employees and the more than 60,000 Dentsu employees. Maybe, he thought, at some point there will be 60,000 bots in the company.