Alongside productivity, RPA can enable a multitude of benefits 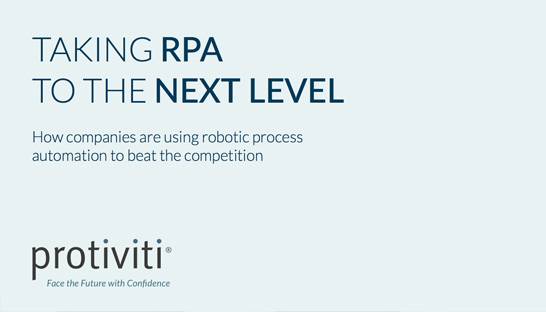 According to a study by Protiviti in collaboration with ESI ThoughtLab, cross-industry organizations want to significantly increase their spending on the automation of robotic processes (RPA). While the spend is mainly used for operational functions, the technology’s track record means that RPA will expand to virtually all business functions in the years to come.

After surveying around 450 executives from large companies (78% of the companies surveyed have annual sales of over 1 billion US dollars) in several regions and industries, the authors have once again confirmed why the automation of robotic processes is one of the most discussed new technologies . Companies that use RPA in their processes benefit from this. While much of the focus is on operational benefits such as increased productivity and cost savings, use cases show that RPA can actually “deliver a multitude of benefits,” said Tony Abel, General Manager at Protiviti.

“Today, RPA is the linchpin for lean and agile processes that empower companies by increasing efficiency, accelerating time to market, and improving financial performance.” When asked how RPA improves its business, while productivity was the number one priority, two aspects that focused on the customer experience – better product quality and customer satisfaction – took second and fourth place.

“While we view RPA as a major driver of improved performance and efficiency, the impact correlates with accuracy and customer experience,” said Prakash Mall, senior director of RPA at Target and one of the respondents surveyed.

Companies are also learning firsthand that many RPA investments can interact with synergies. For example, a retailer uses RPA to manage their supply chain to avoid inventory outages that can frustrate customers. Bots automatically reorder inventory when the inventory management system indicates that supply has dropped to a certain level. Not only are goods in stock more reliably at this large retailer, but store managers also have more time to focus on the customers in their stores.

“Often the biggest advantage of RPA is the time and bandwidth that are unlocked when automating tasks,” commented Jonathan Wyatt, General Manager at Protiviti.

Another advantage of RPA highlighted in the study is the potential to solve complex IT challenges in a lean and agile manner, sometimes temporarily. For example, robotics can help companies make progress while still working with outdated legacy systems. Peter Henstock, a senior data scientist at Pfizer, said that bots can “bypass” legacy systems by extracting data from various systems that are not connected. The bots can then do the tasks that these systems cannot do on their own.

Sharon Lindstrom, executive director of consulting firm Protiviti, added, “Technologies like RPA can extend the life of many of these legacy investments and extract more value than they ever thought possible.”

With that in mind, it’s no surprise that companies are investing heavily in RPA and planning to devote even more resources to developing their RPA skills over the next two years. They currently spend an average of between $ 1 million and $ 10 million on RPA, the size of which depends heavily on a company’s RPA lifetime. 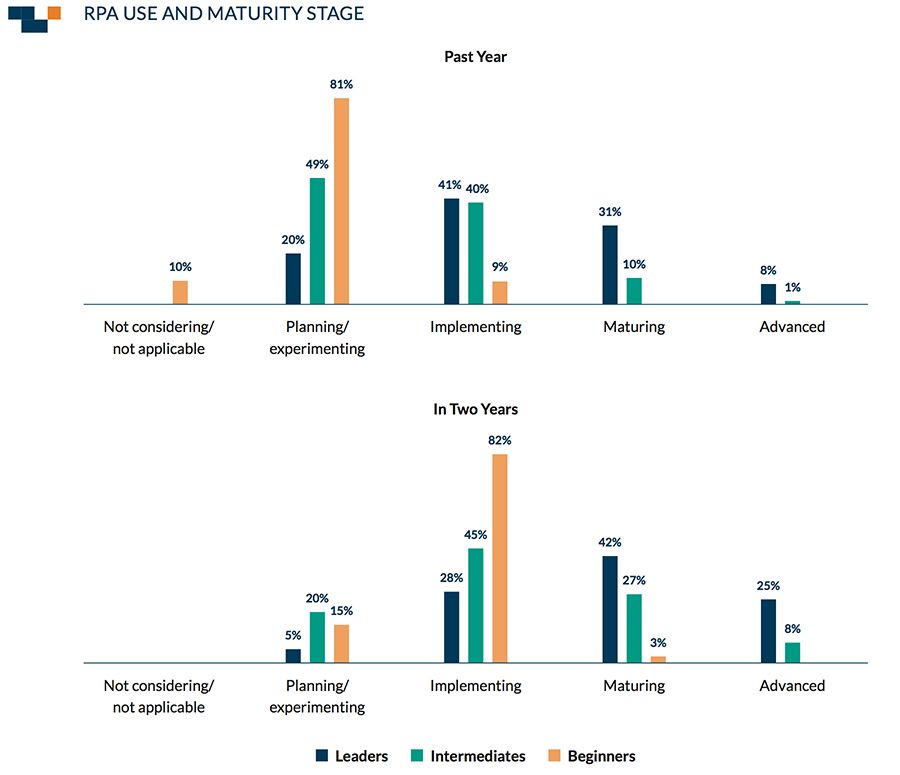 Survey data found that financial services and technology / media / telecommunications companies came out on top, followed by healthcare, consumer products (including retail) and manufacturing companies. Energy and utilities have made the least progress at only 9% at the mature or advanced stage. While all industries expect progress in the next two years, not much will change in the relative position of the players – those currently at the top will retain their advantage.

In addition to the fact that advances in RPA are not cheap, companies using this technology face a number of challenges when adopting it. The inability to prioritize potential RPA initiatives is cited as an obstacle by 40% of respondents, while 30% think their scattershot approach has made it difficult to track the best uses of RPA. Other challenges that are most common are concerns related to cybersecurity (40%), regulation (30%) and the shortage of skilled workers (24%).